So far in my self-inflicted challenge to re-create the Technical Bakes from the Comic Relief GBBO episodes, I have attempted Chocolate Eclairs, and Bakewell Tart, with some reasonable successes. I'm not going to lie - I got a little bit cocky. So I decided that the third challenge to face would be the Custard Slices. For this, I am using Paul Hollywood's recipe from the BBC Food site.

I dutifully purchased the required ingredients, and tonight set about reading the recipe and preparing to conquer the Custard Slice. Then I realised two things. Firstly, I have never made rough puff pastry before in my life... and secondly, I have never made patisserie crème, nor have I ever successfully mastered custard from scratch. Needless to say, my confidence was immediately shot.

None-the-less, I bravely opened the packet of flour, and started sifting. As with the previous challenges, I will copy the recipe and instructions below, with some photos of the process. These are my main notes from the recipe. 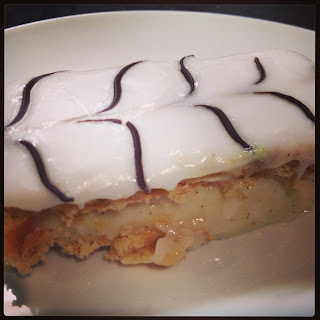 Making the rough puff pastry was surprisingly straight-forward, the instructions were clear - the key I figured out was to handle it as little as possible. I only used about two thirds of the water stated in the recipe until the pastry came together, so stopped adding it then. The rolling, folding and resting sequence is quite time consuming, in fact this recipe is one for a leisurely afternoon or evening bake, as there are lots of steps for mixing, cooling, assembling, and quite a few breaks in between. (It does give you plenty of time to clean up and wash up in between stages though).

I was quite pleased with my pastry, although both sheets did puff up more on one side than the other, and the bottom sheet flaked quite a bit when I transferred it to the tin.

The patisserie crème was the bit that I was most daunted by, and I think I cooked it a touch too long as I had to work really hard to get it through the sieve at the end but other than that I managed to follow the recipe fairly uneventfully.

I assembled the pastry and patisserie crème, and finally spread the icing over the top layer. As both my sheets of pastry were a bit bumpy, I turned the top sheet over so that the flat bottom side was facing upwards (I'm all for using illusion to hide mistakes!). I drew on the lines of melted chocolate, and pulled a cocktail stick through to create the 'feathered' effect, and voilà! By no means perfect, but I was happy with the first attempt, and most importantly they tasted great! Home-made is always better than shop-bought! 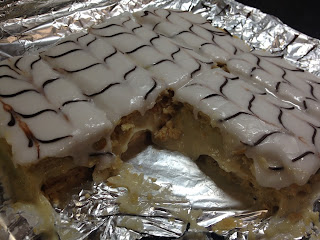