Microphone Cupcakes: A How To Guide

Yesterday I uploaded a post about my cousin's birthday party, where I made her a One Direction cake, and a batch of these microphone design cupcakes. I mentioned that I had a few troubles along the way, and I wanted to share with you all a step by step how I made these, and a few things I would do differently next time.

To make these sparkly little treats, you will need the following;

- A good quality sponge cake batter
- Ice cream cup cones (the ones with the flat bottoms)
- Edible silver spray - I used Dt Oetker's Shimmer Spray in silver, from Tesco
- Plenty of kitchen roll
- Buttercream frosting
- Coloured sugar crystals - I used silver and pink here, but would have preferred black (my local shop was out of stock)
- Liquorice and/or strawberry laces
- A skewer
- A small amount of royal icing in a piping bag 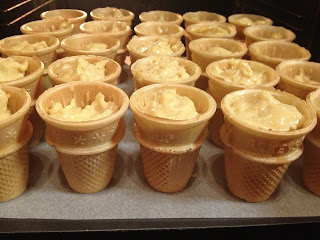 So, to start, we bake the cupcakes in the ice cream cones. I love this method for two reasons, one because you don't need to use a muffin or bun tin, because they stand up by themselves, and two, because the sponge bakes really even inside, without forming a crust on the edges, so it is really soft and light to eat.
Based on a sponge recipe that calls for equal parts butter, sugar, egg and flour, I found that one egg (approx 54g) and equal of the rest of the ingredients filled 4 cones. For the party, I used 6 eggs, and 330g of the additional ingredients to fill 24 cones. Divide the mixture equally between the cones, place on a baking tray lined with a sheet of baking parchment, and bake in the oven at 180 degrees for about 20 minutes, or until the tops are firm to touch.


Remove from the oven, and set to cool on a cooling rack. At this point use a small pallet knife to remove any overspill or edges from the sponge, so that all the cones are even ready for the microphone top to be iced. 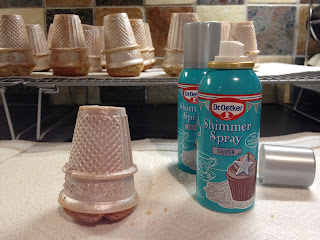 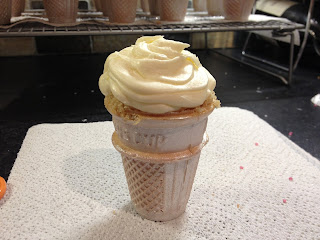 Once the cones are cool, the next step is to make them appear metallic. I used here a Shimmer Spray from Dr Oetker. I found this product easy to use, however you need to make sure that you have covered every available surface with kitchen roll, as the glitter gets everywhere. I used two cans of the spray to cover 24 cones, but to be honest, they would have looked better if they had a third coat as well - you can still see the cone colour through the silver. The cans are quite expensive (£3.99 each) so I would have hoped that they would have stretched further. I also found that once they are coated the silver comes off on your fingers so keep handling to a minimum.

Once the cones are dry to touch, then we ice the top of them. Pipe or spoon buttercream frosting onto the top of the sponge. We will be making a dome shape, but the buttercream can just be applied like the picture.

Empty the sugar crystals into a bowl and dip the buttercream portion of the cone in. I have to apologise here, I had too many hands full and couldn't photograph the process. 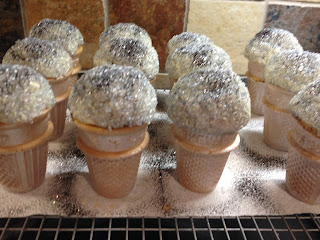 Anyway, rotate the cone so that the buttercream is completely covered in the sugar crystals. Remove, and use the palm of your hand to to gently cup the top, moulding the frosting and crystals into a dome shape as per the photo.

I had some issues here getting hold of black sugar crystals. My local cake shop explained that they could order in for me, however I didn't have the luxury of time, so had to settle for silver. Again, I bought two pots, yet they didn't stretch anywhere near as far as I had hoped. I made 12 silver, and then had to make 12 in pink as I had some in my cupboard. 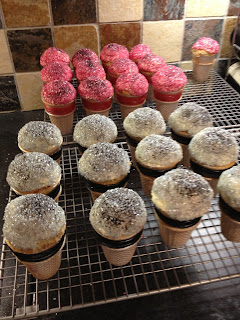 I also added some black edible glitter to the tops of the domes to darken the colour slightly.

Next step is to create the band around the base of the dome. I used black liquorice on the silver topped cones, and red strawberry laces on the pink topped cones. For the liquorice bands, as I was using quite a thick liquorice so cut shorter lengths, and fixed two bands around each of the cones. You need a small amount of royal icing to 'glue' the liquorice into place. Personally I didn't have time to make up a batch of proper royal icing, so used one on my emergency Dr Oetker Designer Writing Icing bags... ;-)

For the red strawberry laces, because they are a lot thinner, I was able to stick the start of the lace in place and then wind the lace around the cone several times to create a thicker band. 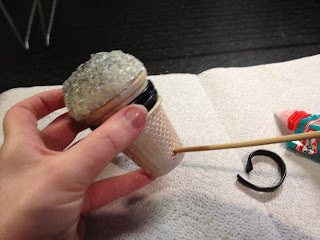 The final step is to create a 'wire' from the base of the microphone leading to the amp. For this step, we need a skewer, the royal icing, and some short pieces of the liquorice and strawberry laces.

Using the skewer, carefully make a small hole at the base of the cone. Try to hold the cupcake by the liquorice band here to stop too much of the silver spray rubbing off onto your hands. For the strawberry laces, a single hole from the skewer is perfect, with the thicker liquorice I had to insert the skewer twice to make a wider hole. 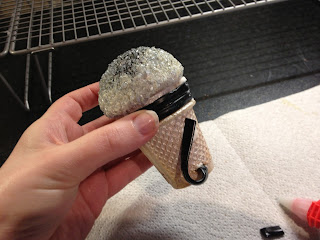 Pipe a small amount of icing into the hole as a glue, and then insert the liquorice into the centre of the cone. This forms the amp wire from the bottom of the microphone. I chose to secure the liquorice up in a slight twist as per the picture with a little blob of icing, but you could equally leave it loose.

And that's it! A batch of cute little microphone cupcakes, perfect for any music themed party! 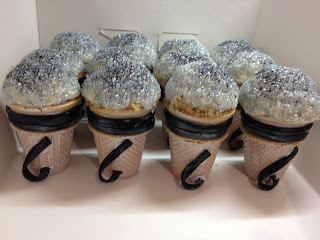